NEW YORK, May 14, 2018 – CIFC LLC (“CIFC” or the “firm”), a leading credit manager specializing in U.S. corporate and structured credit strategies, today announced that Joshua Hughes, who most recently served as Head of Global Distribution at Muzinich & Co., has joined the firm as Head of European Marketing, effective immediately. In this new role, Mr. Hughes will lead CIFC’s fundraising efforts in the U.K. and throughout Europe as the firm establishes its European investment platform. Based in the firm’s new London office, Mr. Hughes reports to CIFC’s Co-CEO Oliver Wriedt.

“Joshua is a highly accomplished sales and marketing executive, whose credit industry expertise and deep institutional relationships will be instrumental as we further strengthen and expand our investor base and product offerings globally,” said Steve Vaccaro, Co-CEO of CIFC. “We are also pleased to open our London office, which firmly establishes our presence abroad, as we seek to leverage our extensive experience investing across U.S. performing and structured credit strategies to tap into European investor interest.”

Mr. Hughes added: “I am thrilled to join the CIFC team at this exciting time in the firm’s growth and evolution, and look forward to serving and diversifying CIFC’s client base with boots on the ground in London.”

Mr. Hughes brings more than 20 years of sales, marketing and business development experience to CIFC. Prior to joining Muzinich & Co. in 2008, Mr. Hughes served as Relationship Manager, Global Markets at Raiffeisen Zentral Osterreich AG and Head of Pension Fund and Investment Consultant Relations at FTSE Russell. He began his career in sales at Thomson Reuters. Mr. Hughes graduated with Honors from Loughborough University with a BSc in Economics.

Founded in 2005, CIFC is a credit manager with over $17 billion of assets under management specializing in U.S. corporate and structured credit strategies. Headquartered in New York, CIFC is a SEC registered investment adviser. Serving institutional investors globally, CIFC is one of the largest managers of senior secured corporate credit. For more information, please visit CIFC’s website at www.cifc.com. 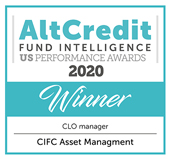